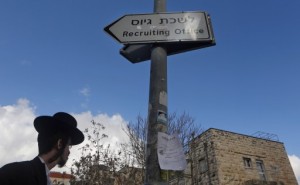 An agreement was reached Monday evening between the Israeli Prime Minister’s Office, Defense Minister Moshe Ya’alon, Justice Minster Ayelet Shaked and the representatives of the chareidi community, according to which further amendments will be made to the conscription law.

The law was passed in the previous Knesset under the leadership of the Yesh Atid party MKs. The amendments in question were part of the coalition agreements of the current government.

The chareidi representatives, Meir Porush and Moshe Gafni of Yahadut Hatorah, called for the amendments to be made before the new budget is approved. In order to prevent the delay of the budget’s approval, new meetings were scheduled in order to reach an agreement on the issue.

According to the new amendments, the “adjustment period” for the conscription law will be extended until 2020, meaning that yeshiva students in the coming four years will continue to enjoy immediate exemption from enlistment. In addition, criminal sanctions will not be imposed automatically in the event that the chareidi community does not meet its enlistment targets, as was determined in the previous version of the law.

The new agreements also determine that whoever serves as Israeli Defense Minister in 2020 will be able to decide whether to impose the conscription law on the chareidi community or not. However, the law outline has yet to be approved by the High Court of Justice and further amendments are expected.