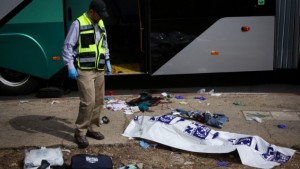 IDF troops entered the Jabel Mukaber neighborhood of East Jerusalem Monday morning in order to destroy the homes of two terrorists who carried out attacks against Israelis earlier this fall, the army said.

On October 13, three residents of the neighborhood carried out two separate deadly attacks in Yerushalayim.

The home of Bahaa Allyan was set to be knocked down on Monday morning, while the home of Alaa Abu Jamal was sealed off with concrete. The army and police blocked off some entrances to the neighborhood before beginning to destroy the two homes.

The High Court of Justice approved the demolition orders for the houses on December 23.

Allyan, 22, and Bilal Ranem, 23, boarded the number 78 bus in the Armon Hanatziv neighborhood, located next to Jabel Mukaber. Armed with a pistol and knives, they attacked passengers, killing two immediately, and mortally wounding a third, who died several weeks later. Over a dozen people were injured in the attack.

Police who arrived at the scene shot and killed Allyan. Ranem was shot and injured, and police took him into custody.

At almost the same time, Alaa Abu Jamal, whose relatives carried out the terror attack on the shul in Har Nof in 2014, plowed his vehicle into a group of people standing at a bus stop on Rechov Malchei Yisroel. Abu Jamal then burst out of his vehicle, armed with a meat cleaver, and viciously attacked the survivors of his initial car ramming attack. Rav Yeshayahu Krishevsky, 60, was killed.