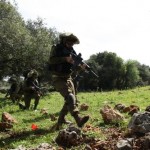 Against the backdrop of a changing battlefield, the Israel Defense Forces is in the process of establishing a new initiative within the Engineering Corps’ elite Yahalom (“Diamond”) commando unit to combat the threat of chemical weapons on land, Israel Hayom reported Monday.

According to an officer familiar with the details, the decision to create the “Sayfan” company was based on the IDF’s most up-to-date intelligence assessments. The new unit’s mission will be to detect, identify, and treat unconventional materials in a combat zone. The officer said soldiers in the new unit will have very high security clearance as well as a unique and advanced set of capabilities.

“We need fighters who are responsible enough to operate this equipment; fighters who know how to think on their feet and use good judgment,” the officer said.

Recruitment to the elite company began some eight months ago, and in another eight months the first class of recruits will complete their professional training. Soldiers in the specialized training course are required to undergo chemistry and biology studies.

The decision to create Sayfan was made after the IDF decided more than a year ago to change the mission of the Engineering Corps’ unconventional weapons unit, the 76th Battalion, which had been tasked with “identifying and cleansing” areas contaminated by chemical and biological weapons on the battlefield. One IDF official told Israel Hayom that the decision to shift the battalion’s designation was made because the “threat of chemical weapons isn’t what it used to be.”