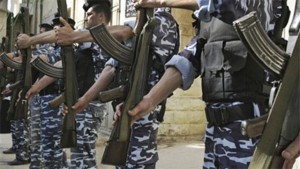 A senior IDF officer said tonight that he believes the ongoing terror wave will continue for two more months, and described those committing attacks as “desperate, frustrated young people.”

The IDF recently provided the political echelon with a number of recommendations on easing conditions for Palestinians amid ongoing terror attacks on Israelis, including supplying official security forces with weapons and ammunition and altering how work permits are issued.

The officer defined the current situation as “a limited uprising, in which the Palestinians are aiming to change the existing situation.”

He added: “In my estimation, a month of quiet could bring about a decline of the other option, which is a renewed outburst that would lead us to a widespread uprising. We are currently seeing an average of 15 points of rioting every weekday and 40 on weekends, each of them involving from dozens to hundreds of demonstrators. But this could become 20,000 or 200,000 demonstrators.”

The officer acknowledged that the IDF’s policy is to minimize Palestinian deaths as much as possible. “We learned a lesson from both intifadas – Palestinian deaths cause outbursts of violence,” he said. “Our rules of engagement are more permissive than restrictive, but when you have a trembling girl with scissors in her hands, you don’t need to riddle her with ten bullets. You could kick her or shoot her in the leg.”

IDF sources said that 95 percent of recent terror attacks were the type of lone-wolf attack that draws inspiration from other terrorists but is not directed by an organization.”These terrorists are desperate and frustrated young people, some of them unemployed,” said the officer.

Among the IDF’s recommendations to the political echelon for easing conditions for Palestinians include changes in the system for granting permits to work in Israel, in order to increase the number of young Palestinians who can go out to work. The idea is to create a pool of workers instead of the existing method, in which Israeli contractors request specific workers and receive permission according to their backgrounds.

Further recommendations by the IDF include the release of dozens of prisoners, including those in administrative detention, and a decision to allow goods from the PA en route to Israeli customers to go through a direct security check and not through checkpoints.

Sources in the Prime Minister’s Office said a few hours later that the political establishment will not approve the provision of additional weapons to the PA or agree to release prisoners.

The PMO also said construction permits for Palestinians are to be conditional on international recognition of building in Israeli settlement blocs. It added that work permits will continue according to the security establishment’s recommendations and that this was why a no curfew has been established in the West Bank.