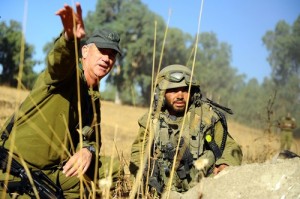 By Amos Regev and Yoav Limor

It’s hard not to take notice of Lt. Gen. Benny Gantz’s good mood. After a long, exhausting, and somewhat bitter summer, the Israel Defense Forces (IDF) chief of staff is calm, happy, and at peace with himself and with the world. The 50-day Gaza war, which Gantz says Israel “absolutely” won, is in the rearview mirror.

But Gantz still has plenty to worry about. On a tour of Tel Hezka in the Golan Heights for the 41st anniversary of the Yom Kippur War, he says the Israel-Syria border “is just one of the fronts” the defense establishment is concerned about at the start of this Jewish calendar year. He describes a “very high potential for instability at any one of [Israel’s] fronts,” including Gaza, Sinai, Syria, and Lebanon. At the same time, though not bordering Israel, Iran and its nuclear program force the Jewish state “to maintain eye contact,” according to Gantz.

In the following interview with Israel Hayom, the IDF leader looks back on Operation Protective Edge and ahead to the developing situation on the northern front.

Did Israel win the summer war with Hamas?

“I think that absolutely [we won], yes. It is important to constantly separate the issue of military achievement from the question of victory and loss, and the question of toppling the enemy. These are three entirely separate concepts. Our objective was to devastate Hamas’s capabilities and invalidate their strategic assets as much as possible, with an emphasis on fire power and terror tunnels.

“I think we made great gains in terms of combating the terror tunnels and fire power. They still have some capability-about 20-30 percent of their short-range rockets-but they sustained a debilitating blow to their fighters, their commanders, their manufacturing facilities, their command centers, and their combat capabilities. And after all that, those guys came to Cairo, defying Qatar, and accepted an open-ended cease-fire agreement with no time limit, and they didn’t get any of the conditions they demanded. I wouldn’t call that losing.”

“We don’t think and we don’t say that the failures of the Yom Kippur War will never be repeated. But I do think that our intelligence abilities are at an extremely high level, with a lot of information and know-how and better access than ever to the intelligence consumers from the strategic level all the way to the operational level in the field. But still, intelligence is not infallible, and it probably never will be.”

Do you know the status of Mohammed Deif, the Hamas military commander targeted by an airstrike and presumed dead?

If you could go back to July 7, the day the war began, what would you do differently?

“I think we need to ask ourselves how much shorter we could have cut the fighting. In my opinion, the answer is not by much, because of the complexity of the diplomatic process that was undertaken, in tandem with the military action and the unwillingness to compromise strategically. But it is worth investigating.”

Some Israeli government officials claim you needed to be coerced into confronting the tunnel threat, into presenting a wider war plan. What‘s your response?

“I will not speak on behalf of the cabinet.”

Then can you speak on behalf of the military?

“Because the State of Israel needs to decide on a move that means a strategic shift for years ahead. These are issues that have been very seriously discussed, and decisions were made that I think are right. On the whole, I am pleased that most of the military’s decisions were approved, but they were all extensively debated, with and without us. Re-conquering Gaza was never part of our objective, as defined by the government itself. If the government decides to redefine the objectives, we will provide the appropriate recommendations. That is how it works.”

With the civil war raging in Syria, does the phrase ‘barbarians on the fence‘ accurately describe what Israel faces at that border?

“There are people here with the potential to become problematic who are simply too busy with other, more pressing matters at the moment. That doesn’t mean that Israel is not in the picture, it just means that we are next.”

Can jihadist terror organizations be defeated from the air, the way the U.S. wants, without “boots on the ground?“

“There are many possible actions that don’t involve ground troops. There are actions that would involve a limited ground force. There are actions, as what we did in Gaza now, that involve a limited maneuver at the end. I suppose that it is possible to contain and debilitate the Islamic State group on its home turf, but if they want to achieve a more substantial objective, they will have to enact ground operations as well.”

What is the most substantial threat currently facing Israel?

“There is no doubt that the northern front is the most menacing arena in terms of scope and the probability of confrontation.”

Just Syria, or Lebanon too?

Is there pinpoint intelligence indicating a specific threat?

“We understand that it is part of their combat style to launch such actions. We heard [Hezbollah head Hassan] Nasrallah say, ‘I will conquer the Galilee.’ He doesn’t mean it literally, but I think he is hinting at offensive actions that we’ve seen from Hezbollah in northern Lebanon and in Syria.”

Can Nasrallah seize an Israeli town?

“Theoretically, yes. Practically, he would have to go through us. Can he think of doing such a thing? Absolutely.”

Are terror tunnels a threat in the north?

“The purpose of tunnels is to cross an area that is covered by the IDF, both operationally and in terms of intelligence. In the south, they used tunnels because the above-ground route was blocked. In the north, the terrain is different; it is not that simple. The topography is such that it can be crossed above ground as well. We don’t know of any active tunnels, but we are constantly on the lookout.”

In Israel, we have relative quiet and prosperity compared to the rest of the Middle East. Do you ever ask yourself why Israelis complain all the time?

“I am very happy that our reality is what it is, and that our standard of living is level with the OECD (Organization for Economic Co-operation and Development). We are a Western nation that has everything you could ever want-a robust economy, infrastructure, growth, high GNP (gross national product).

“So I am in favor of this tendency to criticize, but I only ask that everyone keep in mind that there are enemies at our gates. Therefore, even though we look at things in OECD terms and we are held up to OECD standards, we have to remember that there is also a threat here, mostly external, that could seriously challenge this mechanism. After all, what is the State of Israel? You either love it very much, or you hate it. Those who love it are not from this region. And those who are from this region, you can guess the rest.”

There less than five months remaining in your tenure as IDF chief. What will your legacy be?

“It is not time for that yet. I am still working.”