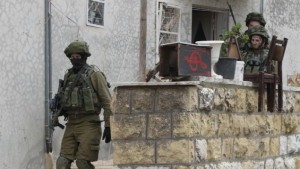 The teen, from the village of Bani Naim, also handed over the rifle he had used to security forces, according to a statement from the Shin Bet security service. Investigators were continuing to question him.

The soldier, who was shot at the Beit Anun junction north of Chevron on Friday evening, was still being treated in serious condition today at Yerushalayim’s Hadassah Ein Kerem Hospital.

He was the fourth person attacked by Palestinian assailants in the West Bank on Friday.

Earlier a shooting attack near the Meoras Hamachpeilah in Chevron wounded two Jewish youths, one of them seriously. The two teens, aged 16 and 18, were hospitalized in Yerushalayim. The 16-year-old was seriously hurt when he was hit by gunfire in the upper body, while the 18-year-old sustained light injuries.

On Friday afternoon, a man in his 40s was seriously wounded when he was stabbed in a West Bank industrial park north of Yerushalayim. The terrorist fled the scene; he later handed himself in to the Palestinian Authority.

Minutes earlier, a Palestinian woman in her 70s tried to drive her car into a group of IDF soldiers near Chevron, but was shot and killed by troops at the scene. None of the soldiers were injured in the attack.