A Chassidishe woman’s Shabbos was spoiled after she bit into a frozen dime buried inside a container of Häagen-Dazs chocolate at her Williamsburg home last Friday.

Sarah Abraham purchased two containers of the delectable confection from a Kent Avenue Duane Reade store on Nov. 11, as she has done once a week since the pharmacy opened several months ago.

But by the fifth spoonful, she tasted something “metallic” – and the dime was in her mouth. 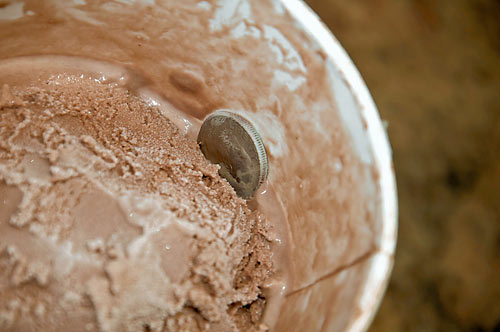 “I had a bad taste and I spat it out,” said Abraham. “I felt something in my mouth and the ice cream didn’t have a good taste from the start. Two hours later, I still felt a metallic taste in my mouth.”

Her husband, frum activist Isaac Abraham, called Häagen-Dazs and the Duane Reade at 4 pm, and complained about finding the frozen coin.

A Duane Reade employee said the store pulled its Häagen-Dazs batch from its shelves in response to Abraham’s complaint and gave its order back to the global dessert company, just to be safe.

A Häagen-Dazs employee told Isaac Abraham on Tuesday to send more information about the incident and ship the icy dime to its California-based quality control center.

But for now, he is keeping the change.

“I’m not an idiot – if I send the dime then my story would melt away with the ice cream,” said Abraham, who is speaking with an attorney. “Luckily, she didn’t break a tooth. Who knows where the dime came from or who touched it before it went into the ice cream?” 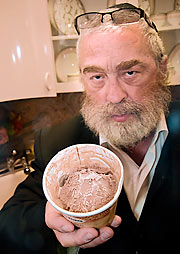 A Häagen-Dazs representative said that the company “apologizes for her experience,” adding that finding a foreign object in chocolate ice cream is “highly unusual.”

“It is made in one location, then it is pumped and filled [into cartons] before it passes through a metal detector that shoots them off a carrier belt if metal is detected,” said Häagen-Dazs spokeswoman Diane McIntyre. “It detects dime, but nothing is infallible.”

The company, which was founded in the Bronx and opened its first retail store in Brooklyn in 1976, has found shell casings or pebbles, but never coins, inside nut-flavored ice cream.

That’s cold comfort to Sara Abraham, who said she is giving up ice cream indefinitely.

“I don’t want to eat it anymore,” said Abraham.