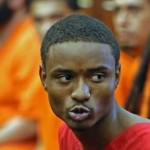 The tall and lanky teen — his distinct hair cut short while in jail — appeared Monday in Miami-Dade Circuit Court for his arraignment after a grand jury last week indicted him for first-degree murder.

Prosecutors say Charles shot and killed Rabbi Yosef Raksin, a rabbi visiting from Brooklyn who was walking to shul in August 2014. Raksin, in accordance with his beliefs, had no valuables on him when he was felled with one .40-caliber bullet to the chest.
Also, WSVN-Ch. 7 reported Monday that it had found a photo of someone thought to be Charles holding a semi-automatic weapon. The photo was obtained from a Facebook page under the name of Papito L. Franklins, which law enforcement sources believe is a social media nickname used by Charles. The photo and page were both deleted hours after his arrest last week.
To read more, go to WSVN-Ch. 7.
{Matzav.com}