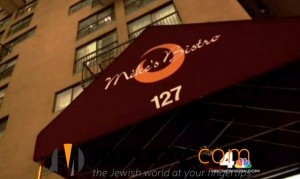 But the I-Team checked into it last week — and found that at least some ghost restaurants continue to do business in the city, NBC NEW YORK reports.

The I-Team visited Mike’s Bistro Asian Fusion on West 72nd Street after failing to find the kosher restaurant listed on the city Department of Health’s restaurant grading website. The I-Team found a restaurant with a Mike’s Bistro sign that was closed with a “for lease” sign up and paper covering the windows.

But when the I-Team ordered edamame and vegetable dumplings from Mike’s Bistro on Seamless, a delivery man arrived within minutes. But he didn’t come out of Mike’s Bistro; he came up 72nd Street on a bike.

The delivery man couldn’t tell the I-Team where our dumplings had been cooked or where he had come from. When The I-Team called the phone number listed for the restaurant on Seamless, the person who answered hung up as soon as the I-Team started to ask questions.

The I-Team found that the Mike’s Bistro that once occupied the 72nd Street address moved to 54th Street more than a year ago. When the I-Team visited them at their new location, they were shocked to see a takeout bag from the other Mike’s Bistro.

“This is definitely not my food,” said David Zinstein, manager at Mike’s Bistro on 54th Street.

Zinstein said his restaurant is kosher, and would never serve Crab Rangoon or Pork Chops, which are listed on the Mike’s Bistro Asian Fusion website.

“We try to hold a very high standard. Especially in the Kosher world — which has to be Kosher food … anything saying Mike’s Bistro could affect our business,” Zinstein said.

After the I-Team questioned GrubHub about Mike’s Bistro Asian Fusion, the company pulled the listing off its website, saying it could not verify it with the city Department of Health. Health officials said they have no record of permits for the restaurant.

GrubHub says since the I-Team first reported on ghost restaurants in November, it requires all U.S. restaurants to confirm that they are in good standing with their local health authority.

In New York City, the company says it checks every new New York City restaurant against the city’s Department of Health database.