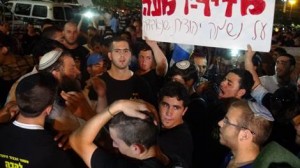 [Click here for video.] Hundreds of protesters demonstrated tonight against the mixed marriage of a young couple from Yafo: Moral, a 23-year-old Jewish woman recently converted to Islam by her groom, Mahmoud Mansour, a 26-year-old Muslim Arab.

At the protest led by the Lehava group which fights assimilation in Israel, former MK Dr. Michael Ben-Ari addressed the crowd, saying “Moral, it won’t help you. They always will remind you that you’re Jewish and where you came from. The children you give birth to will never be treated as equal to them.”

“They tell us that we’re racist – let’s see one Arab woman come marry a Jew at this hall…then we’ll see who’s racist,” added Ben-Ari to the protesters. He was referring to the fact that a Muslim woman who marries a Jew can expect to be murdered by her co-religionists.

As noted by Ben-Ari, in nearly all cases of mixed marriages with Arabs in Israel, the Jewish partner is the bride. It is a well documented phenomenon that such wives often suffer abuse from their Arab husbands, and many require help to escape.

Ben-Ari noted that former Prime Minister Golda Meir, “a prime minister of the Labor party, a representative of the left, etc. – when she spoke about assimilation she said…’whoever marries and assimilates joins the six million (Jews murdered in the Holocaust). She saw in what’s happening here a continuation of the work of (Nazi Leader Adolf) Hitler.”