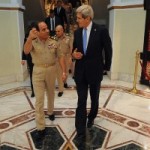 In a symbolic incident that likely raised eyebrows back in Washington, Egyptian security forces forced U.S.  Secretary of State John Kerry and his team of negotiators to pass through metal detectors before they met with President Abdel Fattah el-Sisi at the Presidential palace in Cairo today.

Reporters at the event said security officials asked Kerry and others in his entourage to remove their jackets in order to allow an inspector to pass a magnetic wand over their garments.

Demanding that senior officials go through the process is a generally unheard-of stricture commonly waived for senior diplomatic officials on state business.

In the meeting with Kerry were deputy Chief of Staff Jonathan Finer, adviser David Thorne and State Department spokeswoman Jen Psaki, according to the Israeli Ma’ariv daily.

“There is a framework available to end the violence,” Kerry said Tuesday after two hours of discussions with Sisi, which apparently ended without any movement from Israel or Hamas towards an Egyptian – brokered cease-fire in the 15-day-old Operation Protective Edge.

However, “The international community is coming together… because we’ve seen too much bloodshed on all sides,” Kerry asserted to reporters after the talks with the Egyptian leader.