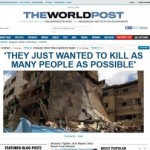 “[T]oo many reporters have forgotten that the highest calling of journalists is to ferret out the truth, consequences be damned.”

On July 24, 2014 the Simon Wiesenthal Center again condemned The Huffington Post, this time for “taking the art of lying and self-delusion to new depths,” in regards to its latest act of anti-Israel bias and incitement.  That incident was merely the latest in a long string of exposes by the SWC, Huff-Watch, HuffPostMonitor and others of HuffPost’s pathological incitement of hatred against Israel and Jews, and whitewashing or legitimizing the Palestinian narrative.

On July 25, however, HuffPost broke the bonds of gravity and took its propaganda war against Israel into the heavens – literally.  Specifically, it gave top coverage to a “news” story that had been debunked by multiple sources 24 hours earlier – that the explosions and rocket fire in Gaza are so massive, that they can be seen from space.

Here is a screencap of how HuffPost presented this “news” story on its front page: HuffPost’s source for the story was a July 23 tweet by German astronaut Alexander Gerst, which read:

“My saddest photo yet. From #ISS we can actually see explosions and rockets flying over #Gaza & #Israel.”

Before you succumb to automatically believing whatever astronaut Gerst says, some facts to consider (which HuffPost’s army of “editors,” “researchers” and “journalists” either didn’t, or ignored):

Given all these facts, do you really think that the exhaust from these rockets, and the explosions they cause, can be seen from 240 miles up? And if you were a (legitimate) news editor, wouldn’t these facts lead you to at least question the veracity of the astronaut’s claim?

Before you answer, consider some additional facts:

Would it really be possible to see these rocket trails from 240 miles up, without the hyper-magnification of an NSA spy satellite?  Of course not.

Keep in mind that these facts were uncovered by individual bloggers on July 24 – a full day before HuffPost published Gerst’s allegation as “news” on its front page.

One by one, legitimate news sources in Israel began picking up on these blog reports, and doing their own research.  Notable among these was The Times of Israel, which enlisted geology professor Michael Harper for a story it also published on July 24, that completely debunked the astronaut’s allegations.

With all this knowledge in mind, it is reasonable to ask:

To know HuffPost, however, is to know the answers to these questions:

In the broadest context, HuffPost giving top-line coverage to a demonstrably false story alleging that the explosions in Gaza are so massive they can be seen 240 miles into space, after it had been debunked by sources large and small, is not that significant.  But it does represent the grimly comical outer-orbit of HuffPost’s willingness to do whatever is necessary to ensure that its readership is incited to hate Israel, and sympathize with the very Palestinian forces that have caused this war, and are deliberately causing civilian casualties.

On the bright side, however, HuffPost has not completely lost its moral sense, and desire to correct erroneous public perceptions.  For example, on July 28 it posted at the top of its front page a weepy-eyed defense of pit bulls.

Perhaps one day, HuffPost will decide to feature such a passionate defense of Israel, to correct the egregious public misconceptions and hatred that it has deliberately and maliciously fomented about it.  And if it were really interested in atoning for its propaganda war against Israel, HuffPost would run the story so prominently that it could actually be seen from space.

“HuffWatcher” is the anonymous creator and editor of HUFF-WATCH. Contact:[email protected].