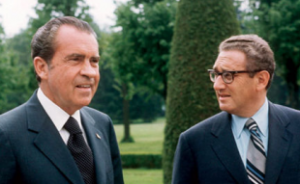 Editor’s note: In connection with the 40th Anniversary of the resignation of President Richard M. Nixon, Roger Stone is releasing his second book, Nixon’s Secrets: The Rise, Fall and Untold Truth about the President, Watergate, and the Pardon (Skyhorse Publishing), on August 11th. Stone was a close confidante and adviser to Nixon during his post-presidency.

Below is an exclusive excerpt where Stone writes of President Nixon’s support of Israel during the Yom Kippur War, despite much opposition from both his Cabinet and Congress.

At 6 a.m. on Saturday October 6, 1973 White House Chief of Staff Alexander Haig woke up President Nixon at his home in California with news that Egypt and Syria had attacked Israel.

The news of Middle East aggression shocked the American foreign policy and intelligence communities to such an extent that a study prepared by the CIA Center for the Study of Intelligence in conjunction with the Nixon Presidential Library concluded, “To intelligence historians, the October 1973 war is almost synonymous with ‘intelligence failure.'”

It became clear in the hours after the attack that the Arabs had surprised Israeli forces and the Israeli state faced the greatest threat to its survival since the original war of independence three decades earlier. Along the border with Syria, along the so-called Golan Heights, 180 Israeli tanks faced 1,400 Syrian tanks supplied by the Soviet Union; likewise Egypt crossed the Suez with 80,000 soldiers facing little Israeli opposition.

In the days following the Yom Kippur attacks Israel suffered a number of setbacks, and Washington became increasingly concerned. Nixon alone concluded that the US must step in to back Israel against Arab forces whose primary military supplier was the Soviet Union-the 1973 war became more than just necessary to save the Jewish state, it became a struggle between the world’s preeminent Super Powers. Kissinger opposed the US action.

It is one of history’s great ironies that Nixon’s proposed airlift played an integral role in the salvation of the Jewish state, as in the years since the release of the Watergate Tapes it has become one of the established facts of the Nixon mythos that the president was a raving anti-Semite. The tapes continue to damn Nixon, who maintained a cognitive dissonance when it came to several prominent Jewish members of his senior staff-Kissinger, White House counsel Leonard Garment, and speechwriter William Safire as well as economist Herb Stein.

In one rant from 1971, Nixon railed against the Jews who in his estimation were both “all over the government” and disloyal, he told Haldeman that the Jews needed to be controlled by placing someone at the top “who is not Jewish.” Incredible, given the position in which he would find himself in two short years, Nixon would argue to Haldeman that, “most Jews are disloyal,” and “generally speaking, you can’t trust the bastards. They turn on you.” In another exchange, just months before the 1973 war, Nixon rants to Kissinger about American Jews and what he saw as their selfish view of foreign policy.

On a call on April 19, 1973, Nixon revealed a concern that American Jews would “torpedo” a US-Soviet summit vowing that, “If they torpedo this summit… I’m gonna put the blame on them, and I’m going to do it publicly at nine o’clock at night before eighty million people”. Then, perhaps most damning, Nixon would go on to argue, “I won’t mind one goddamn bit to have a little anti-Semitism if it’s on that issue… they put the Jewish interest above America’s interest and it’s about goddamn time that the Jew in America realizes he’s an American first and a Jew second.”

Yet, Nixon would play a pivotal role in protecting the Jewish state, as Nixon recognized that the defeat of Israel was unthinkable for US interests. Nixon went to Congress to request authorization for emergency aid for Israel despite the Gulf States announcing a price increase of seventy percent in the wake of the Arab assault. After Nixon went to Congress for authorization, the Gulf States responded vigorously, announcing a total boycott of the United States, causing the oil shock of 1973.

The Gulf States’ retaliation simply served to further entrench the opposition of many who had fought to slow or halt the shipment of weapons to the Israelis (the former being represented by Secretary of State and National Security Advisor Kissinger, the latter being represented by Secretary of Defense Schlesinger). Nixon hit the roof when he learned that Kissinger was delaying the airlift because of a concern that it would offend the Russians. Despite the opposition of his national security and foreign policy brain trust, Nixon ordered the airlift, saying, “We are going to get blamed just as much for three planes as for three hundred,” and later in exasperation at the slow start of US support, said “Use every [plane] we have-everything that will fly.”

Finally, after several days of internal politicking amongst the upper echelons of the Administration, Nixon got his airlift: “Operation Nickel Grass.” Over the course of the airlift 567 missions were flown, delivering over 22,000 tons of supplies, and an additional 90,000 tons were delivered to Israel by sea. Later in her life, Israeli Prime Minister Golda Meir would admit that upon hearing of the airlift during a cabinet meeting, she began to cry.

Nixon’s loyalty drove him to save a US ally from the threat of utter destruction despite the real risk of economic crisis, and political cost to himself. To borrow the phrase from the Kennedy clan, Nixon’s decision to aid Israel was a true “profile in courage.”