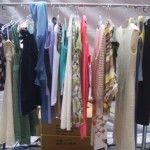 Before I began my formal conversion to Judaism, when I was a wee reporter who covered various stories in the very religious neighborhood of Borough Park, Brooklyn, a Hasidic subject gently suggested that when I attend her organization’s meetings, I dress to fit in. By this, I knew she meant that I dress according to the rules of tznius [modesty], and cover my elbows, collarbone, and knees. Some might have found such guidance irritating, but I wasn’t offended at all. I was thrilled. It felt a bit like going undercover in a culture I had always admired from afar. And, if I’m honest with myself, I also thought covering up would allow me to ignore, if not overcome, any lingering body shame.

When I exited the 55th Street subway station wearing a gray knee-length skirt and high-necked black and gray striped T-shirt, I was able to imagine myself as a character, a person who walked humbly and thought of G-d often. Now, here I am, three years later, a religious Jew, while less observant than many of the people I met in Borough Park, but nonetheless, committed to my faith.

This might seem like a trivial stop on the way to an identity, but to me, it was transformative. Dressing as a religious woman gave me a chance to try on the persona, and I found, that to some extent, the persona fit. (Though I should note there’s variation among Orthodox Jews as to how they observe tznius — some groups wear short sleeves, and others wear stockings year-round). Even so, I’m not sure I’m the best person to teach others about tzniut, which often refers to women’s clothing, but can also mean general humility or proper conduct between genders. I’ve only been learning Jewish culture and belief for a few years, after all, whereas many people have been steeped in the tradition their whole lives.

Some Orthodox Jewish fashionistas have made careers revolving around modest clothing. There’s style blogger Adi Heyman, for example, or the designers behind Mimu Maxi, who produce a line of modest clothing from their home base in Crown Heights, Brooklyn — which, to my knowledge, is the world’s largest community of hipsids (that’s a portmanteau for “hipster” and “Hasid”— you heard it here first.) These women have taken rightful advantage of the increased popularity of modest fashion, and have managed to become style icons for all women, secular or otherwise. They, better than I, can speak to the power of modesty.

But, I don’t relish in telling others what to do, and Judaism is against proselytizing, which works out well for me. Still, there are certain pieces of Jewish wisdom that I plan to harp on in the book I often fantasize about writing: Hasidism for Everyone. One laudable tenet of Hasidism is the primacy of the action over the feeling or intention behind it. At Mount Sinai, when receiving the Torah, the Jews responded, “We will do and we will understand.” The teaching is that because when they first said they would do, it meant they were taking on the obligation, before the understanding.

There are two types of ways to do without understanding: the first is to do something you’ve been told is good that you know you’ll never understand (in a Jewish context, that might mean not wearing garments that contain both linen and wool, which makes no apparent sense). The second is to do something you know you can comprehend, but you just aren’t feeling it yet. An easy example of this is charity. Sometimes you don’t want to give five dollars to a cause. You want those five dollars for a PBR and a bag of chips, or you’re worried that you’re more motivated by the ego boost of doing good than the actual charity itself.

Hasidism says: stop fretting, and do it anyway, because the recipient of the charity cares not a whit for your internal struggles. Do the good thing, and eventually, the feelings will come. It’s kind of a precursor to the well-known 12-step maxim, “Fake it ‘til you make it.”

That’s where my own conception of tzniut comes in. When I dress modestly, I’m forced to think about portraying myself as a person who behaves modestly, and therefore, most importantly, I act accordingly. It makes me contemplate the facets of modesty as a virtue: humility, gentleness towards others, and an effort to push back against one’s natural egotism. And, it makes me consider what people often mistake modesty for: meekness, passivity, and painstaking conformity. As for body image, it’s not a panacea, at least in my experience — I realized that you have to take care of your body, rather than ignore it.

Last month, I took a research trip to central Ohio to visit a young man and his wife, both of whom are converts to a conservative Mennonite church. If you saw them at the grocery store, you’d guess they were Amish, though there are some big differences in their lifestyles. The husband told me that when he initially became interested in Mennonite people, he was obsessed with their dress. Before he even knew anything about them, he would occasionally show up at his high school in a button-up shirt and suspenders. “I’m dressing Mennonite today,” he’d say. His wife told me that she rebelled against her parents (who didn’t approve of her religiosity) by sneaking out and dressing in a long monochromatic dress and a small bonnet covering her bun.

Aside from how hilarious a reversal that is — a teenager terrified that her parents will find out she’s been out on the town, dressing conservatively — it’s a poignant reminder that if you embody that thing you admire, you can eventually become it. It’s as a spiritual twist on the idea of dressing for the job you want.

A little girl puts on her mother’s makeup and high heels because one day she will be a grown woman, and she wants to feel what that’s like. An actress puts on a costume in order to become the character (excuse the Method speak) and thus do her job. I dress with tznius in mind because maybe not now, but some day, I will be a good Jew.

I’ll often think of this when my inner critic pipes up. I’ll be riding the subway in a particularly modest outfit and hear that sneering voice say, Look at yourself. You’re all done up like a good Jew. You may wear the clothes, but you aren’t good and you know it. Here’s a list of all the things you do wrong…

But, then another small voice interrupts, Hey, instead of freaking out like this, why not take the time to say a psalm? Why not give up your seat for that pregnant woman, because the Torah tells us to relieve our neighbors — indeed, our enemies — of their burdens? And, just like that, by pretending to be good, I’m one step closer to actually being good.

This article first appeared at REFINERY 29.