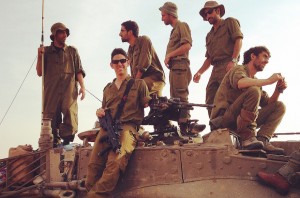 IDF 1st Sgt. Izzy Ezagui, 27, moved to Israel with his family in 2007 and enlisted in the IDF in 2008. While stationed on the Gaza border, a mortar shell hit him, ripping off his dominant left arm, JTA reports.

Izzy says the most challenging element of his recovery was convincing the army to let a one-armed soldier back in. Maj.-Gen. (res.) Yoav Galant, then head of the IDF Southern Command, took Ezagui’s aspirations seriously and pushed his request through IDF bureaucracy.

About a year after his injury, the IDF agreed to reinstate Ezagui on one condition: that he pass all the tests combat soldiers take during their training. Ezagui had to complete tasks ranging from climbing a rope to throwing a grenade.

To unpin his grenade with one hand, Ezagui wrapped scotch tape around the pin and pulled it out with his teeth. Ezagui passed all the tests without a hitch and served as an active duty combat soldier.