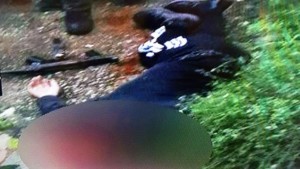 A week-long manhunt to catch Tel Aviv shooter Nashat Milhem ended today after the fugitive gunman made a critical mistake in his cat and mouse game with the security forces.

Milhem, who was on the run since killing three people in Tel Aviv last Friday, entered the home of relatives in the village of Arara. According to Channel 10 television, the relatives encountered him in the morning, and at once saw through his attempt to disguise himself. The Shin Bet security service was swiftly informed of his hiding place.

Milhem’s miscalculation ended up being his undoing.

The father had been arrested earlier this week on suspicion that he was complicit in planning the terror attack carried out by his son, and Feinblatt had been appointed by the state to defend him.

According to Channel 10, Milhem’s relatives apparently called Feinblatt in order to pressure the gunman to turn himself in.

They told the lawyer that Milhem had broken into their home during the night, and asked him to relay the information to the Shin Bet security service.

Mohammed Milhem supported the move, telling his attorney to give the authorities every morsel of information that could help catch his son.

Feinblatt, bound by lawyer-client confidentiality, eventually decided to pass the information to the Shin Bet, and made sure that the relatives who called him would avoid escape any repercussions for Milhem’s presence in their home.

“I don’t remember if I gave you all the details,” Feinblatt wrote in a text message to an unnamed Shin Bet official.

Police special forces and Shin Bet officials descended on the village on Friday morning. By Friday afternoon, one week — almost to the minute — after he opened fire on a bar on Tel Aviv’s bustling Dizengoff Street, Nashat Milhem was dead.

Source: The Times of Israel