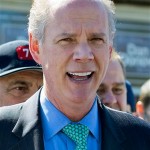 Congressman Dan Donovan (NY-11) today announced that the House of Representatives passed his Securing the Cities Act of 2015 by a margin of 411-4. This is the first bill sponsored by Donovan, New York City’s only Republican representative, that has passed the House. The legislation would permanently authorize the successful Securing the Cities pilot program, insulating it from future cuts and providing the NYPD with more reliable funding to guard against radiological or nuclear attack.

Congressman Donovan said, “As New York City’s only majority representative, I want to make something clear: I will stand with my colleagues to fight to ensure this great city and its residents have the funding and the support necessary to combat those who wish to harm us. Now, with ISIS controlling large swaths of the Middle East, our vigilance cannot waver.”

Earlier this month, the Associated Press reported that the FBI foiled an attempt by smugglers in Eastern Europe to sell nuclear material to ISIS. The report also found that in the past five years, the FBI has disrupted four other attempts by smugglers from the former Soviet Union to sell nuclear material to criminal organizations. In 2010, President Obama described nuclear terrorism as the “single biggest threat” to the United States.

“The Securing the Cities Act would ensure that New York City permanently has the vital training and detection equipment we need to keep our people and our city safe,” said Mayor de Blasio. “We know that New York is the number one terror target in the world – but the NYPD and our close collaboration with our federal partners continue to protect us. We thank Congressman Donovan and our congressional delegation for their leadership in passing this critical program, and urge the Senate to quickly take up the Securing the Cities Act.”

Police Commissioner William J. Bratton added, “Unfortunately, New York City is a target for individuals and groups who wish to harm Americans. As long as that remains the case, the threat of a radiological or nuclear attack is a real possibility, making it imperative that NYPD personnel are properly trained and outfitted at all times. This legislation would provide permanent funding for training and equipment, allowing the members of the NYPD to continue protecting city residents, commuters and the millions of tourists who visit each year.”

The legislation will now move to the U.S. Senate, where it awaits further action.

Congressman Donovan continued, “I ask that the Senate quickly take up this important legislation. National security comes before politics, and now is not the time for uncertainty in funding crucial detection programs for our nation’s top terrorist targets.”

The Securing the Cities program provides funding to the NYPD for equipment, tools, and training to detect radiological and nuclear weapons. Since its start in 2006, the program has provided New York City with more than 5,800 pieces of detection equipment, trained nearly 11,000 personnel, and conducted more than 100 drills.

In 2009 and 2010, funding came under threat because the program was established only as a pilot. Donovan’s bill would permanently authorize Securing the Cities to ensure that the extraordinary capacity built by local law enforcement in conjunction with the Department of Homeland Security can prove effective when it’s most needed. With this vote, the intent of Congress to continue the Securing the Cities program is clear.