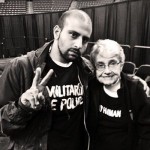 CNN reporter Sarah Sidner was prevented from broadcasting a live report on Monday night from Ferguson, Missouri by protesters who yelled that the network is controlled by “Zionists.”

Ferguson has been the site of angry, racially-charged protests over the last two months following the fatal shooting by local police of a young black man, Michael Brown.

On-the-ground video from Bassem Masri shows the aftermath, in which several protesters continue berating Sidner, telling her they are “holding [her] accountable” for CNN being among a crop of outlets “lying to us since day one.”

“If we don’t get it! Shut it down!” the crowd began to chant, as Masri declares that CNN is run by “Zionists.” The cable network’s cameraman began dismantling his equipment as Sidner and staff exited the scene to a chorus of goodbyes and shouts. Several protestors threatened: “If you continue lying, we’ll come shut you down in Atlanta.”

Missouri resident Masri is a known left-wing, anti-Israel activist whose Twitter profile reads “f*** all haters, Long Live Palestine.” The banner on his Twitter page is dominated by the hashtag #JSIL – a pejorative term for Israel conjured up by anti-Zionists in order to draw a parallel with the Islamic State terrorist group in Syria and Iraq. As Masri interprets it, JSIL stands for “The Jewish State of Israel Lies.”

Masri has also retweeted exhortations to violently confront police officers in Ferguson. One such tweet reads, “if they gonna be violent, u be violent.”

A video posted on YouTube shows the confrontation with Sidner from a different angle. At around 2’00,” Masri can be heard yelling about “Zionists” and claiming that CNN is run by the pro-Israel advocacy group AIPAC. “They’re all run by Israel, so they gotta go!” Masri shouts.