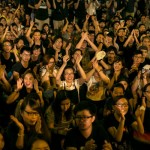 Thousands of protesters flooded the streets of Hong Kong’s central business district on Saturday, even after the government posed an ultimatum: let city workers back in their offices soon or else. Hundreds were still camped out or roaming the streets early on Sunday.

“The government and the police have the responsibilities and determination to take all necessary actions to restore social order,” Chief Executive C.Y. Leung said on television on Shabbos.

Protesters are demanding Leung’s resignation, universal suffrage, and the right to directly choose candidates for elected office, instead of having China choose its candidates. Read more at CNN.