The owners of the girls’ camp that recently had been operating at the former Homowack Lodge have been fined a total of $19,500 by the Sullivan County office of the Department of Health (DOH), according to a story in the Times Herald-Record. The group, Congregation Bais Trana of Skver, had been operating the camp without the necessary permits from the county and the Town of Mamakating.

The fines are a result of numerous and persistent health code violations, which include overflowing dumpsters, mounds of kitchen waste and other debris, and a swimming pool that was being used despite the fact that it contained unsafe water. The children also had free-run of the facility – the buildings of which were left wide open and contained numerous hazards, including exposed wiring and a pervasive black mold problem – and were not being properly supervised.

The county said, however, that it would be willing to settle the case for far less money, $12,650, if the owners would agree to bring the facility up to code. DOH has scheduled an administrative hearing in Monticello on September 23, and the state Attorney General’s office is apparently seeking a court order permanently enjoining the camp from operating in the future. There is no word yet as to whether the two state agencies might be working at cross-purposes. 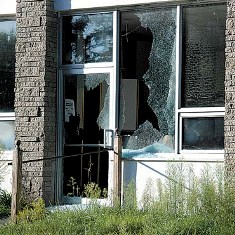 And, in a development late last week, the main building was apparently vandalized, when several windows were broken. The portion that was vandalized is the section that is closest to the road; however, it is also the section that contained the sanctuary, at which a number of young men had been engaged in religious studies during the period when the camp was in operation.