[Update below: Boy found hiding in home attic…] [Video report and live link below.]  The search continues for a 6-year-old boy who is missing after floating over northeastern Colorado in a homebuilt helium balloon that touched down about two hours after lifting off.

The balloon landed about 2 miles northeast of Prospect Reservoir at 1:35 p.m., in Weld County, but the boy was not inside. That’s about 50 miles from where the balloon lifted off.

The boy has been identified as Falcon Heene, the youngest of the family’s three sons.

The boy’s home and neighborhood were immediately searched and there was no sign of the boy, leading everyone to believe the boy had climbed into the craft.

“I got the impression the boy was part of the balloon when it lifted off,” a neighbor told reporters who were gathered outside the Heene family home in Fort Collins.

The balloon, in the shape of a flying saucer, was covered in foil and filled with helium. It has a compartment for a passenger underneath. It lifted into the air from Fort Collins this morning, after the balloon became untethered from the boy’s home.

“We were sitting, eating, looking out where they normally shoot off hot air balloons. My husband said he saw something. It went over our rooftop. Then we saw the big round balloonish thing, it was spinning,” said Lisa Eklund.

The father and son had apparently been working on the aircraft for some time.

“This sort of thing is normal for them,” the neighbor said.

Airtracker 7 located the balloon at 12:35 p.m. at about 8,000 feet in Weld County. It appeared to be slightly tilted at that time.

“The structure at the bottom of the balloon that the boy is in is made of extremely thin plywood and won’t withstand any kind of a crash at all,” said Erik Nilsson, Larimer County Emergency Manager, as the balloon floated thousands of feet over farmland.

Deputies from Larimer and Weld counties tracked the balloon from the ground as it drifted in the skies. Experts said it could remain airborne for up to 12 hours, although it was clearly deflated on one side by 1:25 p.m., and was descending about 400 feet off the ground at 1:30 p.m.

When it landed, at 1:35 p.m., deputies immediately surrounded and secured the balloon then radioed the news, “Be advised, it’s empty. It’s empty.”

“This was never meant to carry anybody,” Messick said.

While the balloon was airborne, Larimer County fire dispatchers asked if Airtracker 7 could use an outside speaker to ask the boy if he had a valve to release helium.

“Is there a way to release some of the helium that this kid may know?” the dispatcher asked. “Maybe we can get him to lower it.”

There was no visible response from the balloon.

There was worry at one point that the balloon might drift into air traffic control corridors used by Denver International Airport, based on its current location and direction. Deputies alerted DIA air traffic controllers to warn them about letting aircraft fly through the area.

Flights heading to the north from DIA were diverted while the balloon was in the air. The Colorado National Guard launched a Blackhawk helicopter and a smaller Kiowa helicopter to try and intercept the balloon, but they were never seen.

Authorities were reviewing photos and cell-phone videos to see if they could determine if the boy was on the craft.

A massive ground search was launched after the balloon touched down and deputies determined the boy was not aboard. Law enforcement agencies were retracing the balloon’s path in an effort to try and locate the missing boy.

7News confirmed the boy is the son of Richard and Mayumi Heene, who appeared on an episode of ABC’s “Wife Swap.”

Richard Heene has been described by friends as a sort of “mad scientist.” He is a storm chaser and has a Web site, called The Psyience Detectives, which “investigates the mysteries of science and psychic phenomenon.” 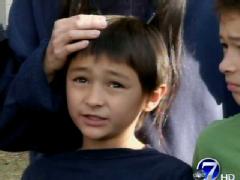 The 6-year-old boy was found hiding in the attic at home today, several hours after the runaway flight of his family’s experimental balloon riveted the nation and led to a frantic search for the child, who was feared to have fallen from the craft.

The news that the boy was safe at home came during an afternoon press conference with Larimer County Sheriff’s Office officials.

“Apparently the boy’s been there the whole time. He’s been hiding in cardboard box in the attic above the garage,” Sheriff Jim Alderden said.

“I don’t want to conjecture but this is not first time we are searching for a kid and once he realizes everyone is looking for him he hides because he’s afraid of getting in trouble.”

One of boy’s older brothers had initially told authorities he saw his brother climb into a box compartment attached to the bottom of the balloon before it became untethered and took off.

“He was very adamant. That was his consistent story,” the sheriff said.

The sheriff’s department said they don’t believe the incident was a hoax, and don’t plan on charging the Heenes for the huge outlay of resources in the massive search.

Volunteers who helped searched for the boy said they don’t feel it was a waste of time or resources and that it was the best ending anyone could hope for.

Falcon’s emotionally drained and relieved parents recounted their roller-coaster day before a bank of TV cameras.

Richard Heene said the family thought Falcon has scrambled inside the weather balloon’s equipment compartment, because he told his 10-year-old brother “he was going to sneak inside.”

Falcon Heene explains why he was hiding from his family.

While clutching a glow stick, the impish Falcon explained that he climbed up the rafters in the garage and hid there after his father chastised him for climbing into the balloon earlier in the day.

“He scared me, because he yelled at me,” the boy said in a high, thin voice. “So I went in the attic. I heard shouting. I didn’t want to come out very soon, or else he would yell at me. I thought I would get in trouble.”

The father explained that he barked at the boy to not climb in the lighter-than-air balloon because its outer skin is charged with a million volts of electricity to help steer it.

“It’s potentially dangerous if you get inside and the electricity comes on,” said Richard Heene, who said he feared his missing son might had been electrocuted in the runaway balloon.

“I’m really sorry I yelled at him,” Heene said as he cradled his son in his arms.

When a reporter asked if the boy was “grounded” for his high-flying hoax, the parents said no.

“We don’t ground our children. But we’re going to talk to him,” the dad said.

When authorities didn’t find the boy after the balloon crashed in a field, the father said: “That kind of tore me apart. The only thing I could think of was he had fallen out.”

Then Falcon came out of hiding and mom and dad learned their youngest son was alive.

The parents denied speculation that the chaotic misadventure — dubbed “Balloon Boy” in Internet reports — was a publicity stunt.

“That’s horrible. After [what] we just went through? No, no, no,” the weary father insisted.

The parents repeatedly thanked the local police and sheriff — and even news helicopters — for searching for Falcon.

“Thank you. Thank you so much,” the mother, Mayumi Heene, added.

Richard Heene has been described by friends as a sort of “mad scientist.” He is a storm chaser and has a Web site, called The Psyience Detectives, which “investigates the mysteries of science and psychic phenomenon.”

Richard Heene said he crafted the homemade weather balloon for experiments in his back yard. He had apparently been working on the balloon for some time.

“This sort of thing is normal for them,” neighbor Bob Licko said.