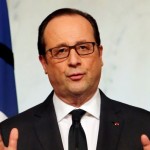 French President Francois Hollande addressed the decision reached by many individuals from the Jewish community in France to hide their Jewishness in fear of anti-Semitism, and claimed that this situation was “intolerable.”

“It is intolerable that in our country citizens should feel so upset and under assault because of their religious choice that they would conclude that they have to hide,” Hollande stated this evening. The statement came after yesterday, the head of Marseille’s Israelite Consistory Zvi Ammar told the Jewish members of his community to take off their yarmulkas in order to ensure their safety.

Meyer Habib, a Jewish member of the French Parliament, chose to wear his yarmulka to office today. “It was important for me to put on my kippah today inside the parliament and to say that if a Jewish person cannot wear a kippah in France, this is not only a Jewish problem – It is a problem for all of France,” Habib told Channel 2 Online News.

“Today it’s the kippah, tomorrow it will be the cross,” he added. “In a democracy everyone can choose to believe or not, and believing includes wearing your kippah and being safe. Sadly that’s not the case in France now. Jihad is spreading across the world and the Jewish people in France are always at the front line.”

The whole debate about the issue arose in France after a senior-level representative of the Jewish community in Paris was found dead in his apartment with signs of violence on his body. Local police estimated that this was a robbery that got out of hand, but did not rule out the possibility that the incident had anti-Semitic roots. In another incident that took place in Marseille, a young man attacked a group of Jewish worshipers with a knife.