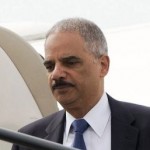 Speaking to the family Michael Brown, Attorney General Eric Holder discussed his own interactions with police that made him feel “angry and upset.” Holder detailed a time he was pulled over in Georgetown while he was a federal prosecutor and asked “Where are you going?” He also related the time when he had his car searched during a traffic stop on the New Jersey Turnpike.

“I remember how humiliating that was and how angry I was,” he said. Holder, who is the first African-American to hold his post, declared, “I am the attorney general of the United States. But I am also a black man.” Read more at the Washington Post.