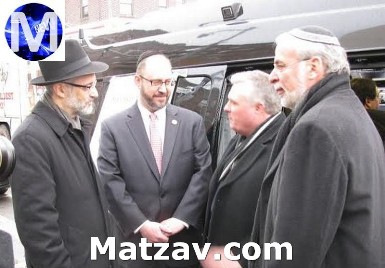 “As I pointed out when we first secured the funding for this initiative, our community is often a potential target for attacks. The new security-surveillance system that we are now putting in place will not only decrease the chances of outside attacks, but it will also enormously enhance law enforcement’s ability to solve and prevent local crimes. If any person were to go missing, G-d forbid, we will have exponentially increased the ability to locate and recover that person. If there’s an assault on someone in our community, we will have increased our chances of catching the criminal.”

“Some have questioned the need for these high-tech surveillance cameras in the community,” said Senator Simcha Felder (D-Brooklyn) who joined Hikind for the demonstration and ribbon-cutting event. “My response to the naysayers is that we must assist law enforcement in doing everything humanly possible to prevent terrorism and other crimes against New Yorkers. I want to thank and commend Senate Republican Majority Coalition Leader Dean Skelos and Assemblyman Dov Hikind for their leadership on this issue. I am proud to be part of this initiative.”

“Providing safety to New York’s residents is a key concern that all of us share, and when it comes to crime, security cameras are a proven deterrent,” said Assemblywoman Helene Weinstein. “I am delighted that my constituents will directly benefit from the presence of these new cameras. I will keep working with Assemblyman Hikind to expand this crucial program and deliver greater security and genuine peace of mind to residents throughout the borough.”

Working with the NYPD and community leaders, Assemblyman Hikind’s office identified key locations throughout the Borough Park and Midwood areas that would offer the broadest surveillance coverage. These include commercial districts, schools and institutions, as well as residential areas. The area is bounded by 60th Street to McDonald Avenue, 9th Avenue to 20th Avenue in Borough Park, McDonald Avenue to Ocean Avenue, and Foster Avenue to Avenue R in Midwood.

80 units containing 4 (four) cameras each, for a total of 320 cameras, will work together to create a security blanket-a virtual eye that can see what has occurred on the streets of the community in the event of a crime.

“This is a historical moment for our community,” said Assemblyman Hikind who thanked Senator Dean Skelos, majority leader of the New York State Senate, for helping secure the funds for the security initiative. “The achievement of this initiative demonstrates the importance of partnering with our government,” said Hikind.

Assemblyman Hikind also thanked Agudas Yisroe, and in particular both Rabbi Chaim Dovid Zweibel (who was on hand for the security initiative unveiling), as well as Dovid Tannenbaum, for partnering with his office. Assemblyman Hikind also thanked both the Flatbush and Boro Park Shomrim for their work in helping secure the communities. Representing the groups were Yanky Daskal, the head of the Boro Park Shomrim, and Bob Moskowitz, head of the Flatbush Shomrim, as well as Naftali Rosenberg from Flatbush Shomrim.

Hikind also thanked JP Morgan-Chase, which was represented at the event, for their role in advancing funding for the initiative; as well as SecureWatch24 and their President/Founder Desmond Smyth for their technical guidance and expertise in creating a system and topography that would best serve the community; Joseph Palmieri, Brooklyn Borough Commissioner of the NYC Department of Transportation; and the NYPD, in particular Commander Mike Deddo of the 66th Precinct and Commander Eric Rodriguez of the 70th Precinct.

In tandem with the security cameras’ unveiling, Nachman Kletzky, father of Leiby Kletzky, released the following statement: “G-d runs the world. But we also have to do our part to protect each other. When we suffered our tragedy, video cameras helped us learn of our child’s fate. Now, with G-d’s help, these new cameras will help protect our community a little better. I feel better knowing that if there’s a crime, a knockout attack, or G-d forbid a missing person, there are security cameras in the community that will help. It’s an honor that this security initiative was started in my son’s name. May his memory be a blessing and may G-d protect all of us.”