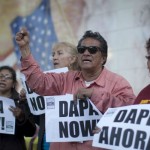 Hillary Clinton on Monday urged President Barack Obama to end immigration raids and provide legal support for all children who arrived at the U.S.-Mexico border without parents.

The Democratic presidential frontrunner has faced increase pressure to take a stand on the raids that were launched on New Year’s weekend and have resulted in the arrest of at least 121 people.

Clinton spoke out against the raids at Iowa’s Brown & Black Forum, which allows each Democratic candidate to separately address minority communities.

The raids have targeted Central American immigrant families that arrived in the U.S. since 2014. Read more at NBC News.