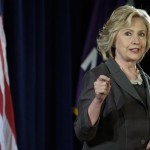 Challenged about past remarks on the need to “respect” and “empathize” with enemies, former Secretary of State Hillary Clinton in last night’s Democratic debate conceded it was “very difficult to put ourselves in others’ shoes” when those others were the likes of the Islamic State of Iraq and Syria (ISIS).

CBS News debate moderator John Dickerson had asked Clinton about comments in a Georgetown University speech “in which you said that it was important to show, quote, ‘respect even for one’s enemy. Trying to understand and – insofar as psychologically possible – empathize with their perspective and point of view.’”

“Can you explain what that means in the context of this kind of barbarism?” he asked, in reference to Friday’s deadly terror attacks in Paris.

“I think with this kind of barbarism and nihilism – it’s very hard to understand other than the lust for power, the rejection of modernity, the total disregard for human rights, freedom or any other value that we know and respect,” Clinton replied.

“Historically it is important to try to understand your adversary in order to figure out how they are thinking, what they will be doing, how they will react,” she continued.

“I plead that it’s very difficult when you deal with ISIS and organizations like that, whose– whose behavior is so barbaric and so vicious that it doesn’t seem to have any purpose other than lust for killing and power,” she said. “And that’s very difficult to put ourselves in others’ shoes.”

‘This is what we call smart power’

Clinton’s remarks in the December 2014 Georgetown University speech cited by Dickerson were made in the context of negotiations with Islamist separatists in the southern Philippines.

Arguing for the value of women leading peace negotiations, Clinton cited an example of such a conflict-resolution effort. Efforts to end a long insurgency by Muslim separatists in the Philippines had proved fruitless until “two strong women” took over the negotiations, “made inclusivity their mantra,” and helped to broker a peace deal, she said.

“This is what we call smart power – using every possible tool and partner to advance peace and security, leaving no-one on the sidelines, showing respect, even for one’s enemies, trying to understand and – insofar as psychologically possible – empathize with their perspective and point of view, helping to define the problems, determine the solutions.

“That is what we believe in the 21st century will change, change the prospects for peace.”

A few days after Clinton’s Georgetown speech, Secretary of State John Kerry was testifying at a Senate Foreign Relations Committee hearing on ISIS, and was asked about his predecessor’s remarks on empathizing with enemies. He defended her.

“Do you believe as secretary of state that a key solution to our enemies such as ISIS and al-Qaeda is, quote, showing respect and, quote, empathizing with their perspective and point of view?” Sen. John Barrasso (R-Wyo.) asked Kerry.

“I don’t think she was referring – I’m confident, I know she was not referring to a group like Da’esh,” Kerry replied, using the Arabic acronym for ISIS.

“I think in terms of what she meant, there’s no question in my mind she was referring to those out there with whom we are not actively fighting or engaged in a war but who are behaving in ways that are clearly opposed to our interests,” he continued, and then went on to suggest she may have been talking about dealing with adversaries like Russia.

“I mean, we have a lot of tensions right now with Russia,” Kerry said. It was important when dealing with Russian actions in Ukraine and elsewhere to examine its “posturing and where it comes from.”

In Saturday’s debate, Clinton declined to characterize the enemy as “radical Islam.”

Dickerson interjected, “He didn’t say all Muslims. He just said ‘radical Islam.’ Is that a phrase you don’t –?”

“I think that you can – you can talk about Islamists who clearly are also jihadists,” Clinton said. “But I think it’s – it’s not particularly helpful to make the case that Senator [Bernie] Sanders was just making, that I agree with, that we’ve got to reach out to Muslim countries. We’ve got to have them be part of our coalition.”