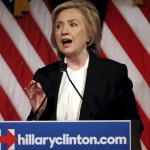 Hillary Clinton distanced herself from her Democratic primary opponents by expressing outward support for the death penalty.

While both Bernie Sanders and Martin O’Malley favor abolishing capital punishment, Clinton said Thursday that while she thinks executions are used too frequently, “I do not favor abolishing it, however, because I do think there are certain egregious cases that still deserve the consideration of the death penalty.”

She added: “But I’d like to see those be very limited and rare, as opposed to what we’ve seen in most states.” Read more at The New York Times.