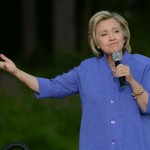 Democratic candidates condemned the attacks in Paris as they started their second debate on Saturday, with Hillary Clinton defending her record as Secretary of State. The debate was held at Drake University in Des Moines, Iowa.

Asked twice whether the Obama administration underestimated the threat of ISIS, Clinton said she “doesn’t think the United States has the bulk of the responsibility” in the region, citing the continued regime of Bashar al-Assad and the troubled regime of Nouri al-Maliki after U.S. forces were withdrawn.

“We have to look at ISIS as the leading threat of an international network. It cannot be contained–it must be defeated,” she said, in a seeming rhetorical break from President Obama.

She also declined to characterize the threat of ISIS as “radical Islam.”

“I don’t think we are at war with all of Islam,” Clinton said, instead referring to it as “jihadist.” She said twice that she doesn’t “think you can paint too broad a brush” when characterizing the nature of the threat. “This is an incredibly complicated part of the world.” Read more at NEWSMAX.