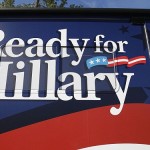 In 2008, Hillary Clinton saddled up for the Kentucky Derby on a thoroughbred that was a sure thing. Her campaign was the finest colt in Kentucky, at odds that barely made it worth betting on her. The race began, and she was up by a quarter mile. Then, as another jockey started to gain, she slipped out of her saddle. She was barely hanging on, bumping along against the dirt, bruised and struggling and still hanging in there a half-a-length back. And then she lost and grudgingly wished the victor luck in winning the Triple Crown.

So you have to figure that, when 2016 rolled around and everyone was saying, “No, this horse is a sure thing,” she was a bit wary. But she got on. She ran strong. She did well. And now, in the final turn, there might be something wrong with the saddle.

If we compare where Clinton is now in the Real Clear Politics polling average, the 2016 picture and the 2008 picture aren’t really all that similar. Nationally, she was doing much better in 2008 than she is right now, perhaps in part because the anti-Clinton vote in 2008 was still split between two people — Barack Obama and John Edwards — instead of just one. But that recent trend line, a function of two new national polls that were close after a bit of a lull, is not very good news. In Iowa, Clinton is running a bit better than she did in 2008 — though, again, she’s dipped significantly recently. It wasn’t until the last week in 2008 that she fell out of the lead. She eventually came in third. She’s doing far worse in New Hampshire than she did in 2008, thanks to New Hampshire being very much the home turf (and home demographics) of her main opponent. In 2008, her lead in New Hampshire evaporated after her Iowa finish, but she then managed to win anyway. A critical point to take away from this — a point that we’ve made often before — is that voting changes polling. If you look at her national numbers afterIowa in 2008, she lost three-quarters of her lead after the caucuses — but gained some of it back after her win in New Hampshire. In 2016, there’s also a big difference between the demographics in Iowa and New Hampshire and other early states, which are much less white. Bernie Sanders struggles with non-white voters, so we can expect to see more dramatic changes after these early states vote.

National numbers don’t mean much right now. They’re fickle. You can slip out of your saddle, you horse can stumble, and you can still win the race. But it can’t be much fun to have it happen in two big races in a row.