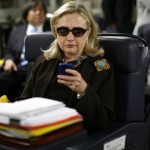 Hillary Clinton is privately signaling to wealthy Jewish donors that — no matter the result of the Iranian nuclear negotiations — she will be a better friend to Israel than President Barack Obama.

But, even as donors increasingly push Clinton on the subject in private, they have emerged with sometimes widely varying interpretations about whether she would support a prospective deal, according to interviews with more than 10 influential donors and fundraising operatives.

Clinton’s private responses in some ways resemble a foreign policy Rorschach test; donors who see a deal as important to world peace have come away thinking that Clinton shares their perspective, but so, too, do donors who oppose any prospective agreement as compromising Israeli security.
Publicly, she’s expressed support for the negotiating process, which she secretly initiated during her time as secretary of state, but has also said “no deal is better than a bad deal.”

With the talks heading into the home stretch in Vienna, the issue is emerging as an early test for Clinton’s presidential campaign. She’s already struggling to balance two of her biggest strengths as a candidate — her deep foreign policy track record and her vaunted fundraising ability — and that balance could become even trickier if there’s a deal.

The negotiations are of intense interest for some Jewish donors whose political giving is animated by their support for Israel. They’re being counted on by Clinton’s allies to donate huge sums for a campaign and a pair of supportive super PACs that, taken together, are expected to raise $2 billion or more.
Clinton’s campaign rejected any suggestion that she’s trying to have it both ways on Iran.

“Her support for the negotiating process and touting support for Israel are not contradictory,” said Clinton spokesman Nick Merrill. “A strong deal is good for Israel in her view.”

And several people who’ve heard her address the issue say the fact that different people can come away with such different interpretations is a testament to her nuanced approach to the issue and her skill as a politician, rather than any vacillation on the subject.

At a Manhattan fundraiser last week featuring a largely Jewish group of donors, Clinton defended Obama against charges he had weakened the U.S.-Israel relationship, asserting that such criticism stemmed from a “perception” problem, according to a donor who was present. But she also suggested that if she were elected president she could correct that problem and bring the two nations closer.

“Diplomacy is all about personal relationships, and I’ve got my own relationships,” she said, referencing her two-decade association with Israeli Prime Minister Benjamin Netanyahu, an ardent opponent of the Iran deal and, occasionally, of Obama. Clinton even cited her rapport with former Israeli ambassador to the U.S. Michael Oren, who last week published a book that was brutally critical of the Obama administration and was timed for release to try to stymie the Iran deal. “I know Michael well, but I haven’t read the book,” she said.

At a fundraiser last month at the Long Island home of Democratic donor Jay Jacobs, Clinton was asked by an Orthodox rabbi about threats to Israel’s security. “She did stress in no uncertain terms her full and fervent support of the state of Israel and the defense of the state of Israel,” recalled Jacobs. “And the people in the audience who heard it seemed to be comfortable with her answer.”