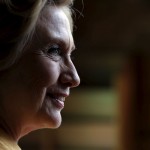 An hour into the final Democratic presidential debate of the year, it was time for a commercial break. The candidates left the stage and returned fresh a few minutes later.

ABC News journalist David Muir, one of the night’s moderators, jumped right back in and starting asking about boosting the economy.

But there was no Hillary Clinton on the stage.

“We believe Secretary Clinton will be coming around the corner any minute,” Muir said.

In the middle of Muir’s question, Clinton walked onto the stage to applause.

Her campaign did not immediately return a request for why she was late, but campaign spokesman Brian Fallon joked about the moment on Twitter.

Clinton also joked about how she needs a bit of extra time during commercial breaks than her competitors during the first Democratic debate.

“Well, thank you,” Clinton replied. “You know, it does take me a little longer. That’s all I can say.”