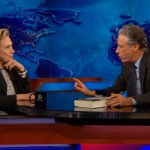 By Aryeh Savir and Matan Pazi

Last Monday on The Daily Show, Jon Stewart devoted two-and-a-half minutes to attack Israel on its counter-terror operation in Gaza. His jokes were one sided and biased, and he placed the blame of the entire situation on Israel.

The next night he hosted Fmr. Secretary of State Hillary Clinton. It seems he tried to elicit from her the same kind of statements, but instead Clinton expressed strong support for Israel. Stewart stated at the beginning of the interview that he did not want to touch upon issues such as “good and evil”, but Clinton discussed just that.

Relating to the supposed humanitarian crisis in Gaza, Clinton stated:  “They’re trapped by their leadership, unfortunately, they have leadership that is committed to resistance and violence, and therefore their actions are mostly about how do we get new and better missiles to launch them at Israel instead of saying, hey let’s try and figure out how we’re going to make your lives better.”

She further reaffirmed that: “The Israelis are absolutely right in saying they can’t just sit there and let rockets rain down, they have a missile defense system which is working well, but that can’t be certain, and now there are drones that are being launched from Gaza. They have tried with the Palestinian authority president Abbas, to figure out a way to try to move forward on some sort of negotiated settlement, very difficult.”

“The Hamas leadership now feels somewhat trapped themselves, because they had an ally with the Muslim brotherhood, I negotiated the ceasefire with Morsi, and Morsi was able to convince the Hamas’s groups to abide by it. He’s gone, and the new regime in Cairo sees Hamas as a danger to them because they see them as a source of instability and violence that can affect them in Sinai and beyond. So they are trapped and they’re trapped, I would argue first and foremost by a leadership that doesn’t really want to make the situation that much better because that gives them a lot of leverage over the poor people in Gaza.”

Stewart tried to explain that the Hamas is offering resistance as freedom fighters, but Clinton replied: ” I don’t agree with that for a couple of reasons, when Israel withdrew from Gaza, and I was aware of that I was in the senate, I was talking to the people who were organizing it, they left a lot of their businesses, there was a really valuable horticultural business  that was set up by the Israelis who had lived in Gaza and the idea was that this would be literally turned over, money was provided, there would be a fund that would train Palestinians in Gaza to do this work and basically the leadership said we don’t want anything left from Israel, destroyed it all. That mentality to me is hard to deal with, if you look at the Palestinian authority  even though it’s hard for them, they have said they want to end the violence, we want to negotiate a two state solution and we recognize Israel’s right to exist, Hamas has not and says it will not do that so we’re really in a terrible dilemma and today there was an offer of a cease fire from the Egyptian government, the Israelis immediately accepted it, Hamas leadership said no, so part of what I see Hamas doing is their identity comes from being the violent resistance because they’re trying to somehow set themselves apart from Abbas and the Fatah segment who say we will talk with, we will deal with, we will cooperate with Israel, despite our desire to have a state.”

Regarding any option of negations, Clinton said: “I say Hamas has rejected the international standards by which they could be a part of such a negotiation.”

“History is a heavy weight”, Clinton explained,  “and there’s no doubt in my mind that both sides know what an agreement should look like, and I remember when Ehud Barak was Prime Minister, he made a very extensive offer, to Yasser Arafat, and I think what happened is Arafat just basically said I’m afraid to take it, I don’t know what comes next, I’m comfortable in the role that I’m in, which is kind of a gorilla turned politician, but I don’t know that I can be a leader, a government leader.”

Hillary is not the only Clinton who places the onus on Hamas for the current fighting. In an interview to NDTV last Thursday, former President Bill Clinton was even more pointed in his assessment, telling an interviewer, “Hamas was perfectly well aware what would happen if they started raining rockets on Israel. They fired a thousand of them, and they have a strategy designed to force Israel to kill their own civilians so that the rest of the world will condemn them.