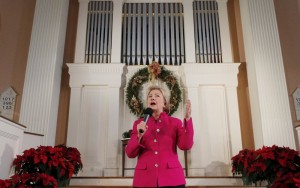 After a reporter from a local New Hampshire paper asked her about extraterrestrials, presidential hopeful Hillary Clinton said, “I think we may have been [visited already]. We don’t know for sure.”

Clinton told The Conway Daily Sun she would look into Area 51, the part of a Nevada military base that conspiracy theorists have long believed contains aliens or evidence of alien existence.

Hillary also jokingly said she would “get to the bottom” of UFOs.

The reporter said he spoke to Clinton about aliens in 2007, when Clinton reportedly told him the top open-records request her husband received at his library involved UFOs.