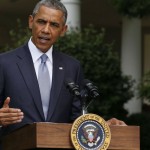 A spokesman for Hillary Clinton said she called President Obama today to clarify her criticism of his administration’s Syria policy as a “failure.”

Clinton made that remark during an interview with The Atlantic with last week. She wanted to “make sure he knows that nothing she said was an attempt to attack him, his policies, or his leadership,” the statement said. It noted that the two have their differences on issues, but they agree on most issues.

“Like any two friends who have to deal with the public eye, she looks forward to hugging it out when she they see each other tomorrow night.” That is, until Clinton finds out that Obama told lawmakers in a private meeting that the criticism is “[expletive].” Read more at Politico.