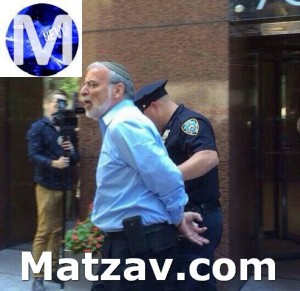 Dov Hikind was arrested and handcuffed today in front of Senator Charles Schumer’s office. He was arrested for disorderly conduct as he blocked the entrance to the powerful U.S. Senator’s New York City office. The question we need to ask is how in the world will this make any difference or help protect Israelis from the growing threat of Iran?

Let’s be honest: Comparing Barak Obama to Neville Chamberlain, or the threat of Nazi Germany to today’s Iran, is rather unfair.

Obama is by no means as educated at Chamberlain was. Neither can we assume a similar altruism. Chamberlain genuinely believed he had achieved “peace in our time” for the United Kingdom. And when he eventually saw how his miscalculation had only advanced Hitler’s ability to achieve European dominance, the former U.K. Prime Minister wholeheartedly supported Churchill’s bid for Britain’s war with Nazi Germany.

All bombs are not created equally. Atomic weapons in the arsenals of the U.S. and Soviets in the 1970s became, in hindsight, deterrents that relegated a potential military conflict to a benign Cold War. Nuclear weapons in the hands of a State that currently boasts bragging rights to the highest rate of terror-supported activities in the world is another matter. Iran has, among other threatened and often-times successful atrocities, sworn to eliminate the State of Israel.

Comparisons of Iran to Khrushchev’s Soviet government would also be misleading. The Soviet’s vantage point progressed from a seemingly virtuous but ultimately failed economic system, where adherents formed the basis of a naïve worldview based, at least in theory, on uniting world workers. The religious fanatics who will hold the keys to an Iranian nuclear arsenal, on the other hand, are boisterous evangelists of a death cult. Deals and armistices and non-aggression pacts with such an aggressive player on the world stage hold little promise.

How many times during an armed conflict with Israel did Islamic military leaders raise the white flag of surrender or accept a negotiated truce only to fire upon the Israelis immediately after their guard was lowered?

One need not be a prophet nor science-fiction aficionado to anticipate the dark dystopia enabled by a powerful, nuclear-armed and genocide-driven band of Ayatollahs and their hundred-million legions of fundamental cannon fodder. The ability to extrapolate from recent history and sociological norms should make anyone of even semi-intelligence more than alarmed by a deal that gives America’s long-standing enemy, and Israel’s most dangerous and blood-thirsty adversary, the ability to produce a nuclear arsenal over time.

What can one man do?

One man can do a lot if they are Winston Churchill or Menachem Begin—if they are charismatic and capable and attain a position of authority whereby they can make a huge difference. But even the smallest among us are obligated to do our share.

Dov Hikind understands this instinctively. He understands that a N.Y. State Assemblyman may have little sway in the U.S. Senate or Congress. Nevertheless, he’s willing to do whatever it takes to bring attention to the village-is-on-fire seriousness of a nuclear Iran. Those who chained themselves to the White House fence or marched in Selma, Alabama for civil rights understood this, as well: All that’s necessary for evil to triumph is for good men to stand silent.

Of course Hikind’s arrest in front of Senator Schumer’s office was street theatre. But street theatre brought attention and an eventual weakening of American willingness to maintain immoral military actions in Vietnam, Laos and Cambodia. Hikind was handcuffed and charged so that others would wake up and also raise their voices.

There was a simple message for Senator Schumer, too—a message which echoed Biblical Mordecai’s plea to Esther the Queen: “Do not imagine that you in the king’s palace can escape any more than all the Jews… And who knows whether you have not attained royalty for such a time as this?”” (Esther 4:13)

Most of us are not elected officials. Most don’t even have a blog. But all of us possess a vote and a voice and social media and prayers. All of us should be willing to sacrifice now so that countless others will not suffer later.

(Note: Yehudah Meth is a former Director of Communications for Assemblyman Dov Hikind. He is no longer employed by Hikind.)