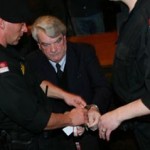 Assemblyman Dov Hikind (D-Brooklyn) was disgusted to learn that David Irving-a leading Holocaust denier and historical revisionist-is planning to speak in New York City to promote the hate literature that he sells on his website. “If this hate monger from the UK comes to New York, I’ll be there with other educated New Yorkers to confront him,” said Assemblyman Hikind.

Hikind, the son of Holocaust survivors, represents the largest number of Holocaust survivors and their descendants in the United States. For years, the Assemblyman has successfully prevented hate salesmen like Irving from poisoning the minds of the uninformed. In recent years, Hikind convinced AmericanExpress and MasterCard to withdraw support from numerous haters like Irving operating in the United States and abroad when he discovered many organizations selling racist, anti-Semitic and

“David Irving is essentially Ahmadinejad II,” said Hikind. “We are duty bound to not allow lairs and haters like him to go unchallenged.”

David Irving is commonly regarded as one of the most vile and vociferous racists and Holocaust deniers in the world. He has stated, “I don’t think there was any overall Reich policy to kill the Jews. If there was, they would have been killed and there would not be now so many millions of survivors.” He called the book Did Six Million Really Die “90%… factually accurate” and in 1989 was condemned in a motion by the United Kingdom’s House of Commons for publishing and writing the foreword to Auschwitz: The End of the Line. The motion described Irving as a “Nazi propagandist and longtime Hitler apologist.”

In a 1989 pamphlet, Irving announced that there was no mass murder in the gas chambers at the Auschwitz death camp and called the gas chambers at Auschwitz a “hoax.” In the early 1990s, He frequently visited Germany to speak at neo-Nazi rallies, claiming that there were no gas chambers at the death camps in a speech delivered in Munich, which led to his conviction for Holocaust denial in Munich in 1991. During his 1992 appeal, Irving called upon those present in the Munich courtroom to “fight a battle for the German people and put an end to the blood lie of the Holocaust which has been told against this country for fifty years.”

After denying the Holocaust in speeches given in Austria, the Austrian government also issued an arrest warrant for Irving and barred him from entering the country. In 1992 he was found guilty by a German court of Holocaust denial under the Auschwitzlüge section of the law against Volksverhetzung and was subsequently barred from entering Germany. Italy, Canada and Australia soon followed suit. In 2005, the Austrian police arrested Irving, who then pled guilty to the charge of “trivializing, grossly playing down and denying the Holocaust.” He was sentenced to three years imprisonment. In 2006, Irving was released from prison, then banned from ever returning to Austria.

Irving is currently touring the United States in an effort to raise money and continue spreading his revisionist history. His “Fifty Year Fight for Real History” is scheduled for: