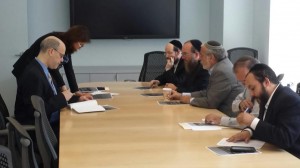 Assemblyman Dov Hikind (D-Brooklyn) met today with the Meera Joshi, Commissioner/Chair of New York City’s Taxi and Limousine Commission, as well as other TLC top brass, to review new practices and procedures that will allow charity volunteers-as well as parents participating in carpools- to transport those in need without interference from TLC agents.
The meeting followed an unfortunate incident in June that resulted in a volunteer from Brooklyn’s Chesed organization receiving a summons and having his car impounded after he attempted to transport a woman in need of cancer treatment, as well as another woman who also needed medical care. After the Chesed volunteer’s car was impounded, the two passengers were left stranded near a cemetery without other means of transportation. Following the incident, Hikind joined with Chesed, Misaskim and the Shomrim to discuss the matter with the TLC in an effort to prevent further unfortunate incidents.
The new protocols that were agreed to today included the issuance of identification cards to Chesed volunteers, allowing individuals to easily identify themselves and their function; phone numbers supplied to the TLC, allowing officers to contact charity group dispatchers to ascertain that a driver is indeed performing volunteer charity duties; and additional sensitivity training for TLC officers, educating them with respect to community traditions and standard procedures (such as the frequent use of carpools).
“I was delighted with how quickly the Taxi and Limousine Commission has come up with measures to prevent further incidents,” said Assemblyman Hikind who had high praise for TLC Commissioner Joshi. “When something like June’s incident occurs, people in need are left in dire straits and are forced to make new medical appointments and find new means of transportation, often at great personal expense. Moreover, it is time consuming and very stressful for a volunteer to then get his car returned after it has been impounded. I think today’s measures will go a long way toward making sure there are no further mistakes by TLC officers in this regard.”
The protocols put forward today to protect Chesed workers will also expand to other groups such as the Shomrim and Misaskim, said Hikind. “These groups do amazing chesed, amazing volunteer work,” said Hikind. “They should be praised and never penalized for their personal sacrifices on behalf of those in need.”
The TLC was also represented by Ray Scanlon (Deputy Commissioner of the TLC’s Uniformed Services Bureau), Izabella Vais (Assistant Commissioner for Policy and Intergovernmental Affairs), and Allan Fromberg (Deputy Commissioner for Public Affairs), as well as several other high ranking officials.