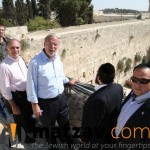 Assemblyman Dov Hikind (D-Brooklyn) voiced his outrage over U.S. Secretary of State John Kerry’s remarks today at the U.S. Embassy in Paris, where he stated that the recent attacks in Paris are different from the Charlie Hebdo attacks earlier this year, suggesting there was a “legitimacy” and “rationale” behind those attacks, whereas Friday’s attacks were “absolutely indiscriminate.”

“I can’t believe what I just read. It’s demented. All of these attacks are about one thing only—adherents of radical Islam determined to eradicate and destroy our way of life. Is Kerry out of his mind? Is there any way to justify and explain such stupid rhetoric? These remarks are insulting, degrading, and absolutely dangerous.”

Hikind continued, “I call on Kerry to apologize immediately. With these disturbing remarks, Kerry gives credence to people who committed these acts of terrorism. Is that understandable, Mr. Secretary of State?”

In remarks today in Paris, Secretary of State Kerry stated, “There’s something different about what happened from Charlie Hebdo, and I think everybody would feel that. There was a sort of particularized focus and perhaps even a legitimacy in terms of – not a legitimacy, but a rationale that you could attach yourself to somehow and say, okay, they’re really angry because of this and that. This Friday was absolutely indiscriminate.”