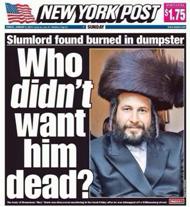 “The New York Post’s unbelievably offensive headline this morning comes the day after Mr. Stark’s family and children, as well as an entire community, laid him to rest and are still mourning his death. For the New York Post to suggest that a person deserved to be murdered is sickening and reaches a new low. The entire community is outraged by such a vulgar headline that is so offensive and horrific. The New York Post should pull their story and issue an apology to the family and community that are still in mourning.”

“I understand that the New York Post wants to sell papers and that they are willing to sacrifice the standards of propriety from time to time. But there is a difference between bad taste and just plain indecency.

“The pain that this headline caused to not only a man’s family but to the entire Jewish community is indescribable and was so unnecessary. It was a heartless act that should never have been allowed. It was truly beneath contempt.”

“I condemn in the strongest possible terms the incredibly insensitive and crass cover of today’s New York Post which mocks the kidnapping and brutal murder of Menachem Stark. The Post must issue an immediate apology to the Stark family and to all New Yorkers for its egregious behavior and failure to exercise any judgment whatsoever in this matter.”

“I’m sickened by the @NYPost condoning the murder & kidnapping of chasidic businessman. I don’t subscribe. If I did, I would cancel subscription.”

“As the people of our great city become aware of the brazen abduction and barbaric murder of a fellow human being, I express my deepest condolences to Mr. Stark’s wife, children and entire family on the loss of their loved one.

“They are the true victims of this heinous crime and our hearts go out to them. We must consider the feelings of a family who lost a cherished husband, father, son and brother.

“The front page of today’s New York Post is particularly reprehensible. It serves no purpose other than to further victimize those affected by this vicious murder. A depraved act like this should never be publicized in a manner that does anything except help the grieving family cope, and assist law enforcement in bringing those responsible to justice.

“Society must stand together to support victims of unspeakable crimes and I ask our news media to exercise responsible judgement when reporting such stories. The NY Post failed us today and owe all New Yorkers an apology.”

Everyone is asked to call and write to the New York Post to tell them to put a halt to the hatred: