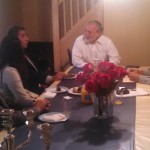 Just 24 hours after holding a press conference in Boro Park to bring attention to mail delivery suspension on 46th Street, Assemblyman Dov Hikind (D-Brooklyn) has received assurances from the U.S. Postal Service’s top brass that all residents will continue to receive their mail as usual, regardless of where their mail slots are. Assemblyman Hikind met with three USPS officials at his home today where the complaints from Boro Park residents were reviewed and the matter was quickly resolved.
Frank Calabrese, District Manager of the USPS Triboro District, along with Thomas J. Surace, Manager of Customer Service Operations for USPS Brooklyn Customer Services and Roxanne Hosein, Manager of Marketing for the USPS Triboro District, visited Assemblyman Hikind at his home where they apologized for the unfortunate situation and guaranteed that the matter had been resolved. They stated that mail would be delivered to all residents in the community regardless of mail slot location. They also said that the official letter that had threatened suspended mail service to 46th Street residents was written by “an over enthusiastic” customer service manager who had not followed protocols.
“I am relieved that this matter could be resolved so quickly and so respectfully by the U.S. Postal Executives,” said Hikind, who had reached as high as the U.S. Post Master General in an attempt to remedy the situation for residents who had complained to him of mail delivery interruption. “I am certain our community will be delighted to start the day anew with the Post Office, who we have relied upon all of our lives to be steady and reliable. Everyone can now look forward to getting their mail again without fear of interruption.”
Assemblyman Hikind thanked his colleagues NYS Senator Simcha Felder and NYS Assemblyman Felix Ortiz for their support. He also had high praise for Frank Calabrese and his senior staff at the USPS.