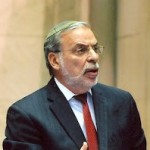 Dismayed that President Obama continues to obsess with stopping Israeli Prime Minister Bibi Netanyahu from addressing Congress on an issue regarding an existential threat to Israel, Assemblyman Dov Hikind (D-Brooklyn) is asking his representative, Congressman Jerrold Nadler, if he may sit in his chair for the speech should the Congressman find himself unable to attend. Further, if Nadler’s fellow Democrats plan to boycott the speech, Hikind says there are plenty of people who would appreciate filling their chairs, too.
“Never in my lifetime can I recall such turmoil in the world as we have now,” said Hikind. “Further, I can’t recollect a time when America’s leaders have taken less of a decisive role in safeguarding long-term American interests on the international stage. While Iran has been long recognized by the U.S. as a terrorist state, and Israel has been our staunchest ally since its inception, an outsider observing the White House’s treatment of the two would have a difficult time discerning who we consider our friend.”
Hikind noted that Iran is the world’s foremost state sponsor of terrorism, which it uses as a strategic tool in its foreign policy. “Iran allies itself with, and openly supports, recognized terror organizations such as Hezbollah and Hamas. Iran’s leaders unashamedly affirm their goal to destroy the State of Israel. As such, U.S. leaders are duty-bound to ensure that Iran is not permitted to develop a nuclear weapon to make good on their threats. Consequently, it’s astounding to hear President Obama still talking about ‘protocols’ for a visiting head of state-an ally-when the lives of millions potentially hang in the balance. This is how we treat our friends? And why be afraid of a speech? What does our President think the Prime Minister might say that we shouldn’t hear? Does he fear Netanyahu may convince Congress of something?”
“President Obama’s only explanation this week was that it is important to ‘maintain protocols’ and that his decision to refuse to meet with Israel’s Prime Minister during this trip is to maintain the U.S.-Israeli relationship and not let it become partisan. But this sends the opposite message. Ignoring a friend in need-a friend in crisis-is not the optimum way to maintain a relationship.
“Given an invitation to speak before Congress in an effort to save his nation from imminent danger is an opportunity no leader of any country would refuse, regardless of protocols. Whether or not Speaker Boehner’s invitation to address Congress followed the accepted or expected etiquette, it’s time to look past decorum and get to the heart of the matter: It is in the best interest of the United States that we listen carefully to what Prime Minister Netanyahu has to say. I am more than disappointed to read that some of my fellow Democrats plan to boycott this critical address.”
In a letter to Congressman Nadler, Hikind asked, “In the unlikely event that you will not be attending Prime Minister Netanyahu’s address to Congress, please allow me to sit in your seat for those few hours. Indeed, as some of your colleagues plan to boycott this speech, perhaps you can help secure their seats for others who are terribly interested in this important address. I believe all American elected officials should carefully weigh what our sole Democratic ally in the Middle East has to say, and I for one will be listening closely.”