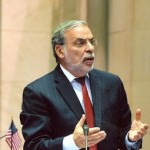 Assemblyman Dov Hikind (D-Brooklyn) applauded today’s decision by the appellate division that reversed a lower court decision to deny the Village of Bloomingburg to build a mikvah. Hikind said, “Religious discrimination of any kind should not be tolerated. This decision sends that clear message.”

“I am thrilled by today’s decision to allow the residents in Bloomingburg to go ahead with their plans to build a mikvah, a ritual bath. Something as fundamental as a mikvah, a vital part of Jewish practice, was presented by opponents as an exclusive spa, which is beyond comprehension. This issue was never about a mikvah—let’s call it for what it was—an attempt by some to keep certain types of Jews out of their community. Whether it’s overt or covert, we must all denounce this type of hatred. We should applaud this decision—which is a huge victory for religious freedom.”

Hikind has long spoken out about anti-Semitism and discrimination, getting involved most recently on related issues in East Ramapo, Kiryas Yoel, Pine Bush, as well as Bloomingburg/Mamakating. Area residents from Bloomingburg originally reached out to Hikind over their concerns about the discriminatory practices by the Town of Mamakating when they tried to prevent frumJews from moving to the area. Hikind met with the Town Supervisor of Mamakating to explain to him about the fundamentals of the mikvah to the Jewish religion.