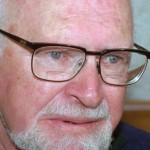 Marcus Klingberg, the highest-ranking Soviet spy caught in Israel, died at his home in Paris on Monday. He was 97.

Klingberg, a biologist, was arrested by Israel’s Shin Bet in January 1983 and subsequently convicted of spying on Israel for the KGB over the previous three decades. He was born in Poland in 1918 and fled to the Soviet Union after the Nazi invasion of Poland in 1939. In the Soviet Union, Klingberg studied medicine and served in the Red Army as a medical officer.

In 1948, Klingberg immigrated to Israel with his wife and daughter and was drafted into the Israel Defense Forces Medical Corps, eventually reaching the rank of lieutenant colonel. In 1957, he was appointed deputy head of the Israel Institute for Biological Research in Nes Ziona.

Klingberg was secretly arrested by the Shin Bet in 1983 after a lengthy investigation into his activities. Upon interrogation, he admitted to being a spy and was sentenced to 20 years in jail. In 1998, Klingberg was released to house arrest. After his 20-year sentence ended in 2003, he left Israel to go live with his daughter and grandson in Paris. Publicly, he never showed any remorse for his actions.

“To this day I don’t consider myself a spy,” Klingberg once said. “I am not proud of what I did, but I do not regret it either.”