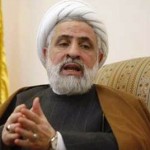 The deputy leader of the Hezbollah terrorist organization, Naim Qassem, said this evening that his group is prepared to fight Israel if necessary.

Speaking hours after Hezbollah claimed responsibility for a bomb attack along the Lebanese-Israeli border which wounded two IDF soldiers, Qassem was quoted by the Daily Star as having said the attack was meant to demonstrate the group’s ability to “respond to Israeli violations”.

“The Shebaa Farms (where the explosion occurred) are occupied and it is the right of the resistance to conduct operations to liberate the land,” Qassem said in a televised interview..

The explosion was meant to signal that the group is ready to fight Israel, despite Hezbollah’s intervention in other regional battle fields, he added.

“We wanted to tell Israelis that we are ready and that there is no way they can assault us while we stand by and watch,” said Qassem, according to the Daily Star.