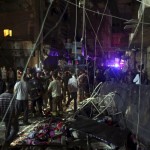 After ISIS implemented a deadly double terror attack in Beirut, Hezbollah promises that they would seek revenge against ISIS: “The war against terrorism will continue.”

“What happened confirms that we are on the correct path,” senior level Hezbollah official Hussein El Halil stated. “This is not a small battle but a long war between the Lebanese people and these terrorist forces. It is not surprising that ISIS took responsibility. Each one of them is a monster who implements these actions against humanity and against the society.”

Also Hamas condemned the double terror attack in Beirut and seeks to express solidarity with the Lebanese people. Hamas noted that they support creating peace among Lebanese citizens and renounce any activity against civilians.

In the fatal double terror attack that is considered the worst within the country within the last ten years, two suicide bombers exploded in the central market near a Shia prayer center. It is said to be an attempt by ISIS to harm Hezbollah, whose stronghold is in that area.