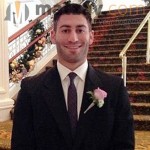 A surveillance video has been released by New Orleans police of the moment a man shot a Jewish Tulane medical student who was coming to the aid of a woman who was being mugged.

25-year-old Peter Gold was shot in the stomach early on Friday morning after he attempted to intervene when he saw the suspect dragging a woman toward a parked SUV.

Gold saw what was happening and stopped his car, at which point the suspect demanded money then ‘became enraged’ and shot Gold in the gut when the victim ‘repeatedly’ said he had no cash.

23-year-old Justin Whittington of Bakersfield was arrested and questioned last night by police about what was seen in the video.

Whittington was then booked into Kern County Jail on charges of child endangerment. His bail is set at $1 million.

While Gold was on the ground cradling his wound, the suspect stood over him and attempted to shoot him again in the head but the ‘large automatic firearm’ he was using jammed and didn’t fire.

The suspect, described as a black male wearing a dark colored hooded sweatshirt, took the unnamed woman’s purse and fled from the scene in the SUV.

Gold, a fourth-year student, was taken to the hospital and initially listed in guarded condition.

He is being treated at Tulane’s University Medical Center and is expected to make a full recovery.

The woman was treated for minor injuries and released.

Tulane President Michael Fitts said in email he was ‘shocked and saddened’ by news of the shooting and the school is offering a $10,000 reward for information, The Advocate reported.

Gold, who also completed his undergraduate studies at Tulane, received the Sociology Department’s ‘Outstanding Student’ award the year he graduated.
One of his professors, Michele Adams, said: ‘Peter is really one of the nicest people you would ever meet, and he is an amazing student, I’m sure, even in med school.’

He said: ‘Right now we’re asking the public to look at the video. ‘There are some parts of it where you can see the person’s face, and you can see the SUV he flees in. Obviously, the level of violence we saw this morning is disturbing, and we would hope that will compel someone to come forward and give us the information we need. We don’t solve these cases without the community’s help, and that’s what we’re asking for here.’