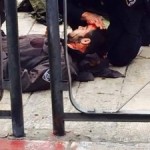 The surge in stabbing and other attacks in Israel since the Jewish New Year last month may have caused some members of the public and media to forget that acts of terrorism were carried out regularly before that as well.

One Israeli who will not forget that fact is Raz Bibi, an IDF soldier with the Border Police, who nearly lost his life on June 21, when he was stabbed in the neck by a Palestinian terrorist.

In spite of his life-threatening wounds, Bibi – who was on duty at the Damascus Gate in the Old City of Jerusalem — managed to shoot and kill the terrorist before collapsing.

Magen David Adom paramedics who arrived at the scene had to perform CPR on the soldier, who was placed on life support when he arrived at the hospital – along with the terrorist.

The mayor also offered a prayer for Bibi’s recovery.

Barkat, it turns out, got his wish. Bibi has not only recuperated from his critical condition, but in two weeks is returning to full active duty, in the most dangerous areas, reported Israeli website 0404 on Wednesday.

“Thank you all for your support,” Bibi said. “In spite of my severe injury, I will not give up and am returning to serve in the Border Police. [My] thanks to God. Long live the people of Israel.”