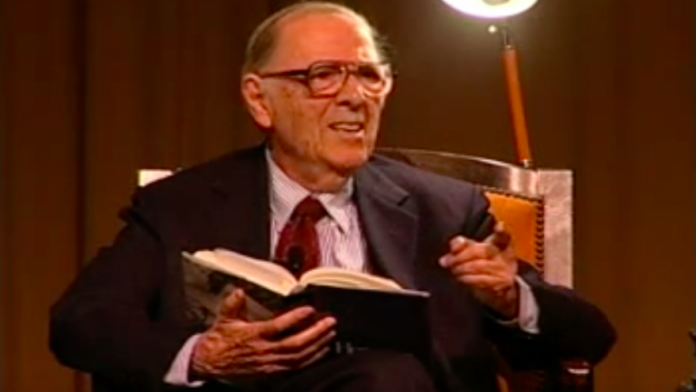 His literary agent, Amy Rennert, said he passed away in his sleep at his home in Palm Springs, Calif., where he settled after living for many years in Washington, D.C.

Wouk’s two-dozen works include The Winds of War, War and Remembrance, Marjorie Morningstar and The Caine Mutiny, for which he won the Pulitzer Prize for Fiction in 1952.

“He really was the Jackie Robinson of Jewish-American fiction,” Jonathan Karp, president and publisher of Simon & Schuster, and editor of Wouk’s final book, Sailor and Fiddler, published in 2015, told National Public Radio. “He was on the cover of Time magazine for Marjorie Morningstar, and he popularized a lot of themes that other writers— like[Saul] Bellow and [Philip] Roth and [Bernard] Malamud—would deal with in their novels.”

In War and Remembrance, Wouk wrote about the Holocaust, “The accounts I have heard of what the Germans are doing in camps like [Auschwitz] exceed all human experience. Words break down as a means of describing them. … The Thucydides who will tell this story so that the world can picture, believe and remember may not be born for centuries. Or if he lives now, I am not he.”

Fellow author Leon Wieseltier said to JNS of Wouk: “He was a prince of his people and a man in full. He found happiness in his tradition and never stopped cultivating it. (He would sit in Palm Springs, across the way from Sonny Bono’s house, and study daily from one of the most beautiful editions of the Talmud that I have ever seen.) His synagogue in Georgetown owed a lot of its survival and success to his steadfastness. And he cultivated his Americanness, too, producing some of the greatest portraits of perhaps its greatest era. He was rigorous and funny and strong, and lived a wholly admirable life.”

In 1945, Wouk married Betty Sarah Brown, who died in 2011. They had three sons—Joseph, Nathaniel and Abraham, their oldest, who drowned in 1951.

“He was a good friend, gag writer for Fred Allen, naval officer, writer of wonderful books (historical and supremely human), an observant Jew and caring person,” former U.S. Ambassador to Romania Alfred Moses told JNS. “He was an example for all of us in living a meaningful life.”