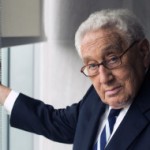 America’s foreign policy elder Henry Kissinger – who got a rave review of his new book from Hillary Clinton – returned the favor during an interview with USA Today Tuesday, saying her leadership at the State Department was more “effective” than his own under GOP Presidents Richard Nixon and Gerald Ford.

“I’ve known her for many years now, and I respect her intellect,” the 91-year-old former secretary of State told USA Today. “And she ran the State Department in the most effective way that I’ve ever seen.”

More effectively than he did, his interviewer asked?