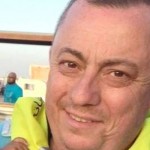 The brother-in-law of Alan Henning, the British aid worker whose death by beheading is shown in a video released Friday by ISIS, says the government of the United Kingdom could have done more for Henning, “when they knew about it, months and months ago.” “I’m just devastated for my sister and two kids for what they’ve gone through, and it’s so hard,” said Colin Livesey. British Prime Minister David Cameron has condemned the murder as “absolutely unforgivable” and has vowed that the U.K. will do all it can to find those responsible.

Henning, 47, was an aid convoy volunteer who was captured by ISIS in Syria nine months ago and is thought to have been held with 20 other Western hostages. Members of the convoy Henning was helping when he was captured have described armed men surrounding a warehouse where the convoy was delivering medical equipment. Gunmen claimed they were suspicious of Henning because he was not Muslim and separated him from the group. In the video showing his beheading, Henning’s executioner, in a London accent, says, “If you, Cameron, persist in fighting the Islamic State, then you, like your master Obama, will have the blood of your people on your hands.”

The jihadists warned that American Peter Kassig, a medic and ex-U.S. Army Ranger who was working in central Syria as of last October, will be killed next. Read more at the BBC.